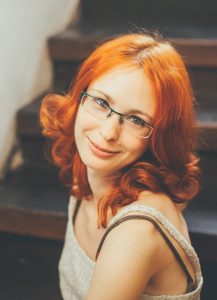 Hello, dear reader!
It all began when I started having dreams about the fantasy world of Enhiarg. Once or twice a week, I traveled to amazing places. At one point, it was an underground city where reptiles clad in fireproof scales competed in the art of sending goods through jellyfish portals, in another there was a boat in the middle of lake of quicksilver and shores covered in heaps of crystal mayflies and another was an iridescent core of a gigantic sentient mushroom in a company of researchers. I was too small to really think about how this world worked and just enjoyed the unusual views and adventures as if I was given a chance to be inside an animated movie that they made for me. There are now four books in the Enhiarg series. The world even has its own encyclopedia to make it easier for the reader to get to know the races inhabiting it, as well as their traditions, outlook, and beliefs. I like reflecting on various would-be philosophic matters — for example, on how can so different creatures live in this world together (in a family, in a country, on a planet) and still keep their individuality at the same time. In addition to writing stories, I enjoy felting and archery. I love long walks. I am a psychologist (logotherapist) and I enjoy helping people to fight for the right to express their own opinion, find new meaning in life during crisis periods or creative stagnation when they are discouraged and it seems that inspiration will never come back to them again.